Hello Everyone, I have been off for a while reviewing my plans for my blog. I’m glad to announce a change of name from The Daylight Series to The Creativity Lounge.

So in the spirit of a bigger and better comeback, Let me present the person under the spotlight on today’s episode of The Creativity Lounge, Mr Abuh Monday Eneojo. 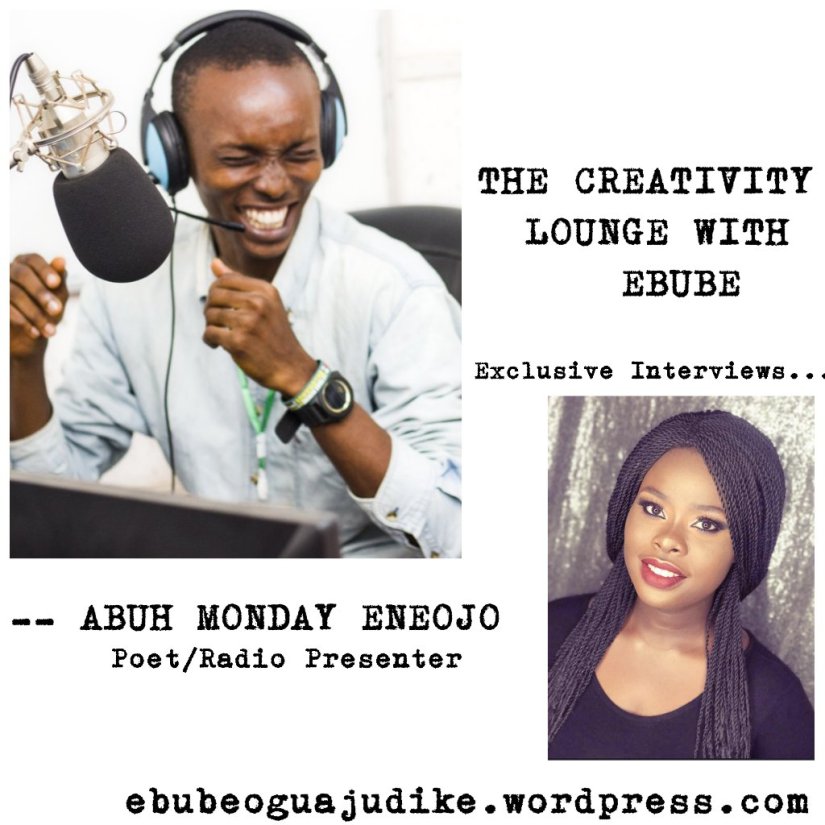 Ebube: Welcome Mr Monday. We would like to know more about you beyond your name so if you don’t mind, tell us more about yourself.

Monday: The only thing you’ll find behind my name is space.😁 Behind the name, Abuh Monday Eneojo, is a poet who loves mother nature and her children. This love has gotten to a point where I stare for minutes, sometimes hours, at things people overlook. I stare at insects, birds, the firmament, muddy planes, flowers etc because I am always dazed with awe of how they came to be. Well, this habit has earned me the nickname, Romantic writer.
I don’t only stare at them. I also take snapshots of sights I tag wonderful. So, if you go through my phone gallery you’ll find nature. I think this is where I State that nature is my Muse. Being a poet is the first. I’m what many would call ‘jack of all trades’ but mine comes with a mastery in one, poet.
I am also an on air personality at a campus radio station in Kogi State University. I started the whole talking on radio after the publication of my first anthology in 2018. The whole journey in broadcasting industry began after the launch of the book. A friend of mine, a broadcaster, walked up to me and said “You’re a very good poet and you write very well. Why don’t you reach out to other lovers of poetry via radio”.
It’s a move I still appreciate today because it has tackled to a great length the issue of being heard as a writer. I hail from a small Hamlet in the muddy planes of Agbeji-ologba in Dekina Local Government Area of Kogi State. That’s where my father says I’m from but the last time I checked I came out from the womb of my beloved mother in the ancient town of Ilorin.

Ebube: For what you referred to as “space”, that’s a whole lot .So how has your writing journey been so far?

Monday: Great. The beginning was not easy. I had to do what many would call strenuous just so I could gather money for my first publication.
I think all the hard work is starting to pay off.

Ebube: Let’s talk about publishing and marketing poetry in Nigeria, tell us a bit of your first publication experience.

Monday: Publishing in Nigeria is quite affordable when you have the resources but marketing is expensive and time consuming.
I took about 20 copies of my first book, The world within, to a local book shop few days after launching it in the confluence state. I was expecting a call from the book vendor but he never called.
Duty called and I had to visit his shop again. The meet was quite strange because he told me that no one reads poetry. All they want is prose or drama, he said.
I knew from the onset that people don’t appreciate the art of poetry anymore so I didn’t for any reason thought about sales. I just wanted people to read my book and let it’s content soothe their flaccid mind.
First experience was tough but it made me smile.

Ebube: To be a writer you must read, how often do you read other works of poetry? Can you say reading has influenced your writing?

Monday: Not too often. Yes! Reading has influenced my writing greatly. Recently, I observed that the aftermath of every literature I read was the birth of a poem. So, I practically write after reading. It helps me greatly.

Ebube: So tell us your top 5 works of literature? Maybe the best of all you’ve read this year.

Ebube: Name the authors you can say have influenced your own writing?

Ebube: What can you say is the role of writers in the Contemporary Nigerian Society?

Monday: Writers carry the burden of the society. It becomes heavy on them as they paint their pain in different genre and words.
The role of writers is somewhat large. Every writer takes the responsibility of correcting societal ills. Though it varies in our contemporary society today. Some writers especially performance poet, paint beauty.

Ebube: One of the poems in your collection is on rape and another on religion; what are other issues you write about and what inspired you to write about these things?

Monday: I have many female friends…and I most times go very intimate with most of them.
One of them walked up to me one day and told me how somehow, a relative, almost raped her.
The news shocked me.
Prior to that time, I read some news on the national dailies most of which gave account of rape victims. These events plunged my pen into the poem you read.
Religion. I was once religious, very religious. This state hunted me. It hunted me cos my personal belief about certain things restricted me to do some things. So, I was criticized when I started doing those things.
Writing for me is retroactive. So, inspiration is conditioned to situation.

Ebube: What do you hope to change with your writing?

Ebube: Now we know you, what should we expect from you in the coming writing seasons?

Monday: I’m currently working on the September edition of Piary (the e-book will be made available next month) and a drama. The drama is in memory of my late aunty who suffered greatly in the hands of culture.

Ebube: Do you outline what you write or do you just write the way it flows from your mind?

Monday: I write the way it flows. It’s better that way for me.

Ebube: What piece of advice are you willing to share with someone on a writing journey very much similar to yours?

Monday: Write until you write!
Speak until you speak!
Imagine until you imagine!
Consistency makes for permanence. Talk people up with the words you want to engineer and they’ll never talk you down…Write what you feel the way you feel it.

Thank you for reading this. Are you a creative seeking a platform to help publicise you and your work. Feel free to contact me by mail: ebubennenna@gmail.com.Much Love💜💜